BLIND:OUT:DATED
Gary Rouzer: Cello and preparations
Nicolas Wiese: Electroacoustic cello manipulation, feedback
The stage concept: Rouzer performs a concert, playing along with a prepared stereo arrangement by Wiese which he has not heard before. > MORE INFO 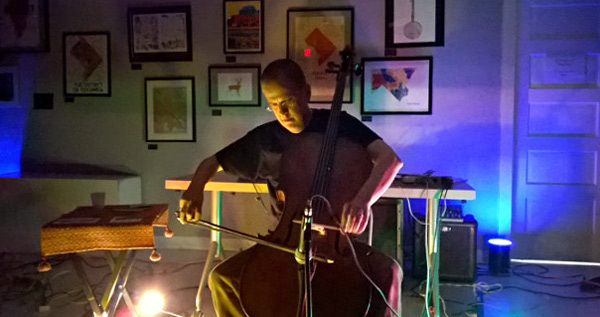 HEIDRUN SCHRAMM & NICOLAS WIESE
besides their site-specific installation concerts (see HERE)
there have been audiovisual concerts and ‚frontal‘ live sets by HS&NW since 2004.

a lecture/sound performance recorded live in 2005:

Video: »Floating Room (Quiet Room)« by Kristine Marx
Sound: Improvised duet by Seiji Morimoto and Nicolas Wiese, along with the video.
This was part of an audiovisual project in which Wiese sent photos of the studio/venue
to Marx in NYC who had never visited Quiet Cue then and elaborated the video intuitively.
In the spread-out installation (also featuring twin artists Natalia & Maria Petschatnikov) two versions of the video were shown in conjunction with a multi-channel/multi-source sound installation, for which Wiese processed recording bits from many different Quiet Cue sessions and concerts, from a cast of around 25 artists.
Seiji Morimoto was one of them, and so was invited to join for a ‚live interpretation‘.